You are here: Home / Railways / Ministry of Railways approves digital Aadhaar and Driving Licence from Digital Locker as proof of identity of passengers for undertaking journey by Train 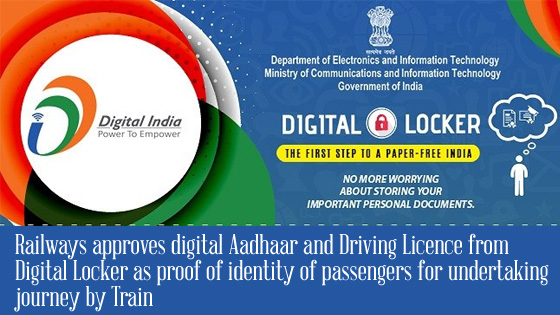 The issue regarding accepting Aadhaar and Driving Licence as valid proof of identity when presented from digital locker account of the passenger has been examined by Ministry of Railways and it has been decided that while undertaking journey in a train, if a passenger shows the Aadhaar/Driving Licence from the ‘Issued Documents’ section by logging into his/her DigiLocker account, the same should be considered as valid proof of identity. It is, however, clarified that the documents uploaded by the user himself/herself (i.e. the documents in ‘Uploaded Documents’ section) will not be considered as a valid proof of identity.

At present, the following proofs of identity are considered as valid for undertaking journey in any reserved class of Indian Railways :-

VI. Student Identity Card with photograph issued by recognized School/College for their students